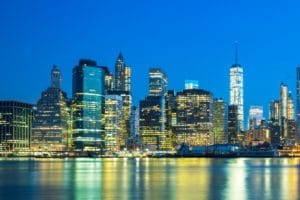 In August of last year, the so-called MiamiCoin (MIA) was launched, while in February of this year the NewYorkCoin (NYC) was issued.

The progress of the two projects: MiamiCoin and NewYorkCoin

The progress of the MiamiCoin to date

The initiative was run by a private individual, but carried out in cooperation with the City of Miami, since part of the proceeds would be used to finance public activities of the city administration.

At the time of its market launch, the price of MIA was 1.4 US cents, which immediately rose to 4.9 within a few days.

After an initial sharp drop, it touched its all-time high at 5.5 cents on 20 September, but since then a real slump has begun.

Less than a month later the price had fallen to 1.8 cents, and in December it closed 2021 at around 1 cent.

In the following months, it plummeted to 0.099 cents at the beginning of May and has since recovered a little to the current 0.35 cents, which is 93% less than the peak in September, and 75% less than the placement price.

In other words, so far it has proved to be a failed investment, but in truth it did not seem to be a real investment from the start.

What was certain was that buying MiamiCoin served primarily to finance the activities of the city administration, somewhat like a form of donation, and that only at a later stage could it perhaps also be an investment. This second hypothesis does not seem to have come true so far.

Trading volumes on the exchanges show that there has never been any particular interest in this token, even though they have never dropped much from their peaks, even at the time of the huge drop in value during 2022.

On the contrary, trading volumes were relatively high only in the first few days after placement, then dropped a little and have always remained low and virtually constant. For example, in the last 24 hours, MIA for USD on Okoin were only traded for a total of $124,000.

The same company that issued the MiamiCoin also issued the NewYorkCoin (NYC), in circulation since February 2022.

NYC was not as successful as MIA, with trading volumes of just over half.

At the time of placement on the markets, the price was around 0.16 cents, rising to 0.67 cents in early March.

Since then there has been a decline, down to 0.10 cents at the beginning of May, and now the price is around 0.18 cents, which is 72% less than the peak, but slightly more than the placement price.

There was also no spike in trading volumes on the days of the placement, as with MIA, and they have remained low and fairly constant ever since.

The crypto markets’ lack of interest in these tokens reveals that they have been anything but a success, despite the big name they bear and who is behind them.

It is very likely that crypto investors care little about donating their capital to city governments, and it seems that they do not believe that these crypto projects can have much of a future.

The fact is that tokens like MIA and NYC do not carry much value in themselves and do not really entitle their holders to any benefits or advantages. Therefore, they are not in great demand in the market and end up being snubbed by investors.

It is no coincidence that other crypto-friendly city initiatives, such as Lugano, have focused instead on Bitcoin and stablecoins, rather than on tokens of dubious value.

The post The MiamiCoin and NewYorkCoin projects appeared first on The Cryptonomist.